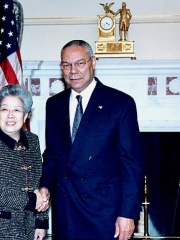 Wu Yi (born November 1938) is a retired Chinese politician. She was one of the country's most visible leaders during the first decade of the 21st century, best known for taking on the role of Minister of Health from April 2003 during the SARS outbreak, shortly after becoming Vice Premier of the State Council, a position she served in between March 2003 and March 2008. She was also a member of the Politburo of the Communist Party of China. Read more on Wikipedia

Among politicians, Wu Yi ranks 6,196 out of 15,710. Before her are Emine Hatun, Publius Juventius Celsus, Nepotianus, Sinchi Roca, Philip, Elector Palatine, and Cerdic of Wessex. After her are George, Crown Prince of Serbia, Geert Wilders, Vasile Milea, Shi Le, Francesco Maria del Monte, and Beatrice of Bourbon, Queen of Bohemia.