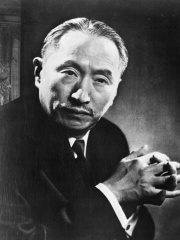 Koo Vi Kyuin (Chinese: 顧維鈞; pinyin: Gù Wéijūn; Wade–Giles: Ku Wei-chün; January 29, 1888 – November 14, 1985), better known as V. K. Wellington Koo, was a statesman of the Republic of China. He was one of Republic of China's representatives at the Paris Peace Conference of 1919. Wellington Koo served as an ambassador to France, Great Britain and the United States; was a participant in the founding of the League of Nations and the United Nations; and sat as a judge on the International Court of Justice in The Hague from 1957 to 1967. Read more on Wikipedia

Among politicians, Wellington Koo ranks 6,059 out of 15,710. Before him are Antonio de Torres Jurado, Antoine, Duke of Lorraine, William Ernest, Grand Duke of Saxe-Weimar-Eisenach, Welf I, Duke of Bavaria, Zalmoxis, and Tôn Đức Thắng. After him are Rifaat al-Assad, Euphemia, Yuri II of Vladimir, Girolamo Riario, Julia Gillard, and Julia the Younger.