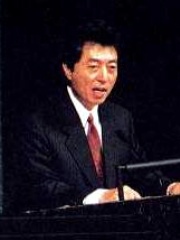 Morihiro Hosokawa (細川 護煕, Hosokawa Morihiro, born 14 January 1938) is a Japanese politician who was Prime Minister of Japan from 1993 to 1994, leading a coalition government which was the first non-Liberal Democratic Party (LDP) government of Japan since 1955. After a funding scandal in early 1994, he was forced to resign. He later ran unsuccessfully as a candidate for Governor of Tokyo in the February 2014 gubernatorial election as an independent supported by the Democratic Party of Japan. Read more on Wikipedia

Among politicians, Morihiro Hosokawa ranks 6,264 out of 15,710. Before him are Az-Zahir, Christian August II, Duke of Schleswig-Holstein-Sonderburg-Augustenburg, Prescott Bush, Carlos Lacoste, Vímara Peres, and Birutė. After him are Alain Juppé, Emperor Daozong of Liao, Bernhardus Varenius, Wiman of Gojoseon, Sisavath Keobounphanh, and Alben W. Barkley.