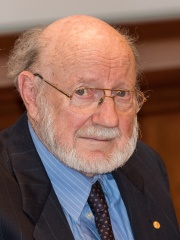 William Cecil Campbell (born 28 June 1930) is an Irish biologist and parasitologist with United States citizenship, known for his work in discovering a novel therapy against infections caused by roundworms, for which he was jointly awarded the 2015 Nobel Prize in Physiology or Medicine. He helped to discover a class of drugs called ivermectins, whose derivatives have been shown to have "extraordinary efficacy" in treating River blindness and Lymphatic filariasis, among other parasitic diseases affecting animals and humans. Read more on Wikipedia

William C. Campbell is most famous for being the co-winner of the Nobel Prize in Physiology or Medicine in 2015. He was awarded the prize for his work on discovering a new drug, called ivermectin, which kills parasitic worms and has been used to treat people with river blindness.

Among CHEMISTS In Ireland