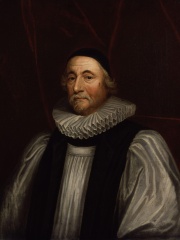 James Ussher (or Usher; 4 January 1581 – 21 March 1656) was the Church of Ireland Archbishop of Armagh and Primate of All Ireland between 1625 and 1656. He was a prolific scholar and church leader, who today is most famous for his identification of the genuine letters of the church father, Ignatius of Antioch, and for his chronology that sought to establish the time and date of the creation as "the entrance of the night preceding the 23rd day of October... Read more on Wikipedia

James Ussher was a protestant bishop in Ireland who is most famous for his chronology of the world. He calculated that the world was created on October 23, 4004 BC.

Among philosophers, James Ussher ranks 455 out of 1,089. Before him are Michel Serres, Vinayak Damodar Savarkar, Leo Strauss, Vincent of Beauvais, Luce Irigaray, and Francisco Ferrer. After him are Phaedo of Elis, Linji Yixuan, Roger Scruton, Jean-Luc Nancy, Dong Zhongshu, and Priscian.

Among PHILOSOPHERS In Ireland