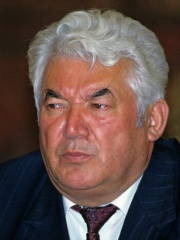 Rahmon Nabiyevich Nabiyev, also spelled Rakhmon Nabiev (Tajik: Раҳмон Набиев; Russian: Рахмон Набиевич Набиев), (5 October 1930 – 11 April 1993) was a Tajik politician who served as the First Secretary of the Communist Party of Tajikistan from 1982 to 1985 and twice as the 2nd President of Tajikistan from 23 September 1991 to 6 October 1991 and from 2 December 1991 to 7 September 1992. He was also partly responsible for the Tajik Civil War. Rising out of the regional nomenklatura, Nabiyev ascended to power in 1982 as First Secretary of the Communist Party of Tajikistan. Read more on Wikipedia

Among politicians, Rahmon Nabiyev ranks 7,363 out of 15,710. Before him are William II, Elector of Hesse, Emperor Go-En'yū, Emperor Xingzong of Liao, Gegeen Khan, Skirgaila, and William IV, Landgrave of Hesse-Kassel. After him are Frederick Louis, Prince of Hohenlohe-Ingelfingen, Luchino Visconti, Yael Dayan, Joan of France, Duchess of Brittany, Malietoa Tanumafili II, and Frederick, Duke of Bohemia.

Among POLITICIANS In Tajikistan