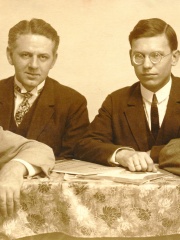 Edgar Alexei Robert von Wahl or de Wahl (23 August 1867 – 9 March 1948) was a Baltic German teacher, mathematician and linguist. He is most famous for being the creator of Interlingue, a naturalistic constructed language based on the Indo-European languages, which was initially published in 1922. He was born at Olwiopol (according to some sources in Bohopil, a town nearby), Kherson Governorate, Russian Empire (now part of Pervomaisk, Mykolaiv Oblast, Ukraine). Read more on Wikipedia

Since 2007, the English Wikipedia page of Edgar de Wahl has received more than 16,097 page views. His biography is available in 27 different languages on Wikipedia making him the 34th most popular linguist.