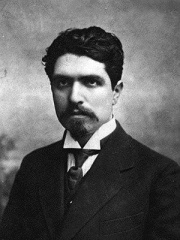 Stepan Georgevich Shaumian (Russian: Степан Георгиевич Шаумян; Armenian: Ստեփան Գևորգի Շահումյան, Step’an Ge'vorgi Shahumyan; 1 October 1878 – 20 September 1918) was a Bolshevik revolutionary and politician active throughout the Caucasus. Shahumyan was an ethnic Armenian and his role as a leader of the Russian revolution in the Caucasus earned him the nickname of the "Caucasian Lenin", a reference to the leader of the Russian Revolution, Vladimir Lenin.The founder and editor of several newspapers and journals, Shaumian is best known as the head of the Baku Commune, a short lived committee appointed by Lenin in March 1918 with the task of leading the revolution in the Caucasus and West Asia. His tenure as leader of the Baku Commune was marred with numerous problems including ethnic violence between Baku's Armenian and Azerbaijani populations, attempting to defend the city against an advancing Turkish army, all the while attempting to spread the cause of the revolution throughout the region. Read more on Wikipedia

Among politicians, Stepan Shaumian ranks 4,575 out of 15,710. Before him are Francis, Duke of Teck, Archduchess Maria Elisabeth of Austria, Julius Schaub, Georgios Papandreou, Lucius Antonius Saturninus, and Aristobulus I. After him are Ben Carson, Madame Nhu, Amyntas I of Macedon, Takahito, Prince Mikasa, Toomas Hendrik Ilves, and Cyril Ramaphosa.