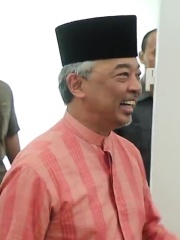 Al-Sultan Abdullah Ri'ayatuddin Al-Mustafa Billah Shah ibni Almarhum Sultan Haji Ahmad Shah Al-Musta'in Billah (Jawi: السلطان عبدﷲ رعاية الدين المصطفى بالله شاه الحاج ابن المرحوم سلطان حاج أحمد شاه المستعين بالله; listen ; born 30 July 1959) has reigned as the 16th Yang di-Pertuan Agong (King) of Malaysia and the 6th Sultan of Pahang since January 2019. He was proclaimed as sultan on 15 January 2019, succeeding his father, Sultan Ahmad Shah, whose abdication was decided at a Royal Council meeting on 11 January 2019.On 24 January 2019, days after his accession to the throne of Pahang, he was elected as the 16th Yang di-Pertuan Agong, the head of state, of Malaysia, and was sworn in on 31 January 2019. He was also a member of the FIFA Council from 2015 to 2019. Read more on Wikipedia

Page views of Abdullah of Pahangs by language

Among politicians, Abdullah of Pahang ranks 7,480 out of 15,710. Before him are David VI of Georgia, Bertrand Barère, Jean-Frédéric Phélypeaux, Count of Maurepas, Mutimir of Serbia, Prusias II of Bithynia, and Merneferre Ay. After him are Poul Nyrup Rasmussen, Ieng Thirith, Kâzım Karabekir, Publius Decius Mus, Tefnakht, and Edward the Exile.