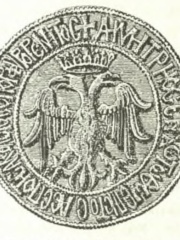 Demetrios Palaiologos or Demetrius Palaeologus (Greek: Δημήτριος Παλαιολόγος, romanized: Dēmētrios Palaiologos; 1407–1470) was Despot of the Morea together with his brother Thomas from 1449 until the fall of the despotate in 1460. Demetrios and Thomas were sons of Byzantine Emperor Manuel II Palaiologos, and brothers of the final two emperors John VIII and Constantine XI. Demetrios had a complicated relationship with his brothers, who he frequently quarreled with, usually over the matter of Demetrios's wish to establish himself as the most senior of them and claim the imperial throne for himself. In 1437, Demetrios accompanied his older brother John VIII to the Council of Florence, the main objective of which was to unify the Roman Catholic and Eastern Orthodox churches so that Western Europe might be more inclined to lend military aid to the desperate Byzantine Empire. Read more on Wikipedia

Among politicians, Demetrios Palaiologos ranks 5,957 out of 15,710. Before him are Siemowit, Federica Montseny, Emperor Junna, Valeriy Borzov, Tiberius Claudius Narcissus, and Emperor Go-Hanazono. After him are Beatrice of Burgundy, Lady of Bourbon, Beatriz, Duchess of Viseu, Duchess Luise of Brunswick-Wolfenbüttel, Gogukcheon of Goguryeo, Georges-Charles de Heeckeren d'Anthès, and Louise Bénédicte de Bourbon.

Among people born in 1407, Demetrios Palaiologos ranks 4. Before him are John Hunyadi, Lorenzo Valla, and Esen Taishi. After him are Agnes of Burgundy, Duchess of Bourbon, Bartolomeo Bon, and Ashikaga Yoshikazu. Among people deceased in 1470, Demetrios Palaiologos ranks 5. Before him are Jacopo Bellini, Charles VIII of Sweden, Barthélemy d'Eyck, and Ferdinand, Duke of Viseu. After him are John II, Duke of Lorraine, Gaston, Prince of Viana, and Ibn Taghribirdi.