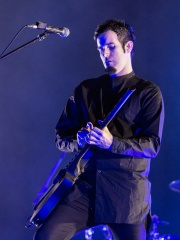 Robert Swire-Thompson (born 5 November 1982) is an Australian-British musician, singer, songwriter, record producer and DJ, best known as the founder and vocalist of the Australian drum and bass and electronic rock band Pendulum, as well as DJ and co-founder of electro house duo Knife Party formed of Swire and Gareth McGrillen. Originally from Perth, Western Australia, he relocated to the United Kingdom in 2003 with fellow Pendulum co-founders Gareth McGrillen and Paul "El Hornet" Harding. Swire has since fulfilled a broad spectrum of roles as a member of Pendulum, ranging from songwriting to singing while performing live with an unusual guitar-like MIDI controller – Starr Labs' Ztar Z6S-XPA. Swire also plays guitar, bass, keyboards, percussion, and other instruments. Read more on Wikipedia

Among MUSICIANS In Australia