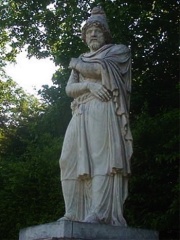 Tiridates I of Armenia

Tiridates I (Parthian: 𐭕𐭉𐭓𐭉𐭃𐭕, Tīridāt; Greek: Τιριδάτης, Tiridátes) was King of Armenia beginning in 53 AD and the founder of the Arsacid dynasty of Armenia. The dates of his birth and death are unknown. His early reign was marked by a brief interruption towards the end of the year 54 and a much longer one from 58 to 63. Read more on Wikipedia

Page views of Tiridates I of Armenias by language

Among politicians, Tiridates I of Armenia ranks 5,339 out of 15,577. Before him are Matthias Erzberger, Dhu Nuwas, Willem Drees, Sverker II of Sweden, As-Salih Ayyub, and Viktor Abakumov. After him are Kurt von Hammerstein-Equord, Birsa Munda, Fu Hao, Wanyan Liang, Henry III, Margrave of Meissen, and Min Aung Hlaing.