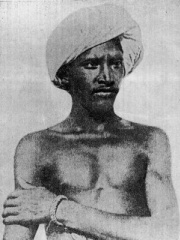 Birsa Munda pronunciation (15 November 1875 – 9 June 1900) was an Indian tribal freedom fighter, and folk hero who belonged to the Munda tribe. He spearheaded a tribal religious millenarian movement that arose in the Bengal Presidency (now Jharkhand) in the late 19th century, during the British Raj, thereby making him an important figure in the history of the Indian independence movement. The revolt mainly concentrated in the Munda belt of Khunti, Tamar, Sarwada and Bandgaon.Birsa received his education in Salga under the guidance of his teacher Jaipal Nag. Read more on Wikipedia

Among politicians, Birsa Munda ranks 5,341 out of 15,577. Before him are Willem Drees, Sverker II of Sweden, As-Salih Ayyub, Viktor Abakumov, Tiridates I of Armenia, and Kurt von Hammerstein-Equord. After him are Fu Hao, Wanyan Liang, Henry III, Margrave of Meissen, Min Aung Hlaing, Siemowit, and Vladislaus I, Duke of Bohemia.