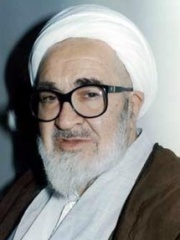 Grand Ayatollah Hussein-Ali Montazeri (Persian: حسینعلی منتظری‎ [hosei̯næˈliː-e montæzeˈɾiː] pronunciation ; 24 September 1922 – 19 December 2009) was an Iranian Shia Islamic theologian, Islamic democracy advocate, writer and human rights activist. He was one of the leaders of the Iranian Revolution and one of the highest-ranking authorities in Shīʿite Islam. He was once the designated successor to the revolution's Supreme Leader, Ayatollah Khomeini, but they had a falling-out in 1989 over government policies that Montazeri claimed infringed on people's freedom and denied them their rights, especially after the 1988 mass execution of political prisoners. Read more on Wikipedia

Among politicians, Hussein-Ali Montazeri ranks 5,209 out of 15,577. Before him are Prince Henry of Prussia, Karl August Wittfogel, Emperor Min of Jin, Prince Oskar of Prussia, Desiderata of the Lombards, and Markos Vafeiadis. After him are Lucius Aemilius Paullus, Aleksander Čeferin, 9th Dalai Lama, Cynisca, Tukulti-Ninurta II, and Josias, Hereditary Prince of Waldeck and Pyrmont.