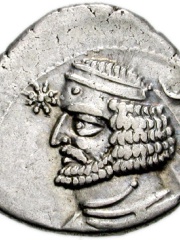 Orodes II (also spelled Urud II; Parthian: 𐭅𐭓𐭅𐭃 Wērōd), was King of Kings of the Parthian Empire from 57 BC to 37 BC. He was a son of Phraates III, whom he murdered in 57 BC, assisted by his elder brother Mithridates IV. The two brothers quickly fell out and entered into a dynastic struggle, in which Orodes was triumphant. Meanwhile, the Roman general and triumvir Marcus Licinius Crassus had made an attempt to extend his share of Roman territory by eastward conquest. This attempt proved disastrous, with Crassus meeting his end in 53 BC, in the Battle of Carrhae, by Orodes' general Surena. Read more on Wikipedia

Among politicians, Orodes II ranks 5,091 out of 15,577. Before him are Ladislaus Hunyadi, Marcia, Toshiki Kaifu, Pan Geng, Fritz Thyssen, and Baldwin IV, Count of Flanders. After him are Princess Victoria of the United Kingdom, Arnuwanda III, Ivan Sratsimir of Bulgaria, Jin Youzhi, Ludovico III Gonzaga, Marquis of Mantua, and Yigal Allon.