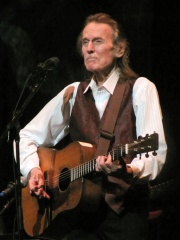 Gordon Meredith Lightfoot Jr. (born November 17, 1938) is a Canadian singer-songwriter and guitarist who achieved international success in folk, folk-rock, and country music. He is credited with helping to define the folk-pop sound of the 1960s and 1970s. He is often referred to as Canada's greatest songwriter and is known internationally as a folk-rock legend.Lightfoot's songs, including "For Lovin' Me", "Early Morning Rain", "Steel Rail Blues", "Ribbon of Darkness"—a number one hit on the U.S. Read more on Wikipedia

Among singers, Gordon Lightfoot ranks 959 out of 3,541. Before him are Boz Scaggs, Margot Hielscher, Éva Marton, Roy Eldridge, Yaroslav Yevdokimov, and Viorica Ursuleac. After him are Tommy Körberg, Simón Díaz, B. J. Thomas, Tammy Wynette, Manna Dey, and Jamala.