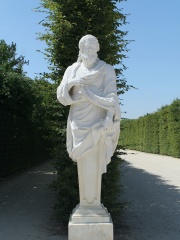 Isocrates (; Ancient Greek: Ἰσοκράτης [isokrátɛ̂ːs]; 436–338 BC) was an ancient Greek rhetorician, one of the ten Attic orators. Among the most influential Greek rhetoricians of his time, Isocrates made many contributions to rhetoric and education through his teaching and written works. Greek rhetoric is commonly traced to Corax of Syracuse, who first formulated a set of rhetorical rules in the fifth century BC. His pupil Tisias was influential in the development of the rhetoric of the courtroom, and by some accounts was the teacher of Isocrates. Read more on Wikipedia

Isocrates is most famous for his orations, which were written speeches that he delivered to persuade his audience to take a certain course of action.

Page views of Isocrates by language

Among philosophers, Isocrates ranks 139 out of 1,081. Before him are Bonaventure, Swami Vivekananda, Rudolf Christoph Eucken, Baron d'Holbach, Wilhelm Dilthey, and John Rawls. After him are Zhu Xi, Edith Stein, Jiddu Krishnamurti, Clement of Alexandria, Simone Weil, and György Lukács.

Others Deceased in 338 BC