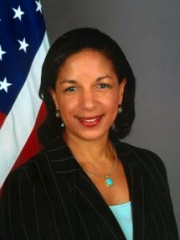 Susan Elizabeth Rice (born November 17, 1964) is an American diplomat, academic, Democratic policy advisor, and former public official who served as the 27th United States ambassador to the United Nations from 2009 to 2013 and as the 24th United States national security advisor from 2013 to 2017. Rice was born in Washington, D.C., and attended Stanford University and New College at the University of Oxford, where she received a DPhil (PhD). She served on President Bill Clinton's National Security Council staff from 1993 to 1997 and was the assistant secretary of state for African Affairs at the State Department from 1997 to 2001. Rice's tenure saw significant changes in U.S.–Africa policy, including the passage of the African Growth and Opportunity Act, support for democratic transitions in South Africa and Nigeria, and an increased U.S. Read more on Wikipedia

Since 2007, the English Wikipedia page of Susan Rice has received more than 4,588,958 page views. Her biography is available in 27 different languages on Wikipedia making her the 13,322nd most popular politician.