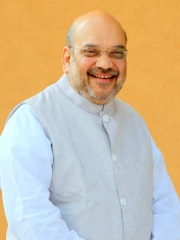 Amit Anilchandra Shah (born 22 October 1964) is an Indian politician currently serving as the Minister of Home Affairs. He served as the President of the Bharatiya Janata Party (BJP) from 2014 to 2020. He was elected to the lower house of Parliament, Lok Sabha, in the 2019 Indian general elections from Gandhinagar. Read more on Wikipedia

Since 2007, the English Wikipedia page of Amit Shah has received more than 5,446,861 page views. His biography is available in 20 different languages on Wikipedia making him the 13,045th most popular politician.