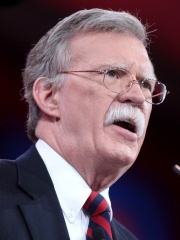 John Robert Bolton (born November 20, 1948) is an American attorney, diplomat, Republican consultant and political commentator who served as the 25th United States Ambassador to the United Nations from 2005 to 2006 and as the 27th United States National Security Advisor from 2018 to 2019. Bolton served as a United States Assistant Attorney General for President Ronald Reagan from 1985 to 1989. He served in the State Department as Assistant Secretary of State for International Organization Affairs from 1989 to 1993 and Under Secretary of State for Arms Control and International Security Affairs from 2001 to 2005. He was an advocate of the Iraq War as a Director of the Project for the New American Century, which favored going to war with Iraq.He was the United States Ambassador to the United Nations from August 2005 to December 2006, as a recess appointee by President George W. Read more on Wikipedia

Since 2007, the English Wikipedia page of John R. Bolton has received more than 4,073,490 page views. His biography is available in 34 different languages on Wikipedia making him the 25th most popular diplomat.

Among DIPLOMATS In United States