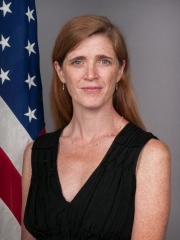 Samantha Jane Power (born September 21, 1970) is an Irish-American academic, and Pulitzer Prize-winning author who served as the 28th United States Ambassador to the United Nations from 2013 to 2017. She is a member of the Democratic Party. Power began her career as a war correspondent covering the Yugoslav Wars before embarking on an academic career. Read more on Wikipedia

Since 2007, the English Wikipedia page of Samantha Power has received more than 2,271,283 page views. Her biography is available in 26 different languages on Wikipedia making her the 83rd most popular journalist.

Among JOURNALISTS In Ireland

Among journalists born in Ireland, Samantha Power ranks 2. Before her are Veronica Guerin (1958).