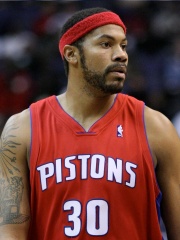 Rasheed Abdul Wallace (born September 17, 1974) is an American former professional basketball player who played 16 seasons in the National Basketball Association (NBA). A native of Philadelphia, Wallace played college basketball at the University of North Carolina before moving on to the NBA in 1995. Originally selected by the Washington Bullets (now known as the Washington Wizards) as the fourth pick in the 1995 NBA draft, Wallace was named to the All-Rookie second team following his first season. Read more on Wikipedia

Since 2007, the English Wikipedia page of Rasheed Wallace has received more than 1,872,470 page views. His biography is available in 36 different languages on Wikipedia making him the 220th most popular basketball player.