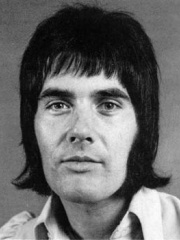 Roderic Evans (born 19 January 1947) is an English former singer. In the late 1960s he began his professional career in The Maze, formerly MI5, after which he was a member of the original Deep Purple line-up who produced three studio albums with a more progressive and pop-driven sound. After recording a solo single, he was a member of the original Captain Beyond line-up, who produced two studio albums. Read more on Wikipedia

Among singers, Rod Evans ranks 279 out of 3,541. Before him are Kirsten Flagstad, Bülent Ersoy, Tereza Kesovija, DJ Khaled, Kanye West, and Christina Aguilera. After him are Selena Gomez, Corry Brokken, Anastacia, Beyoncé, Selena, and Dusty Springfield.