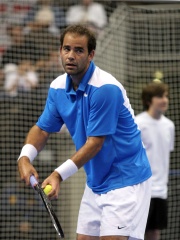 Petros "Pete" Sampras (born August 12, 1971) is an American former professional tennis player. His professional career began in 1988 and ended at the 2002 US Open, which he won, defeating rival Andre Agassi in the final. Sampras won 14 Grand Slam singles titles during his career, which was an Open Era record at the time of his retirement: seven Wimbledon, two Australian Opens and a joint Open Era record five US Open titles. Read more on Wikipedia

Since 2007, the English Wikipedia page of Pete Sampras has received more than 4,976,021 page views. His biography is available in 74 different languages on Wikipedia making him the 28th most popular tennis player.