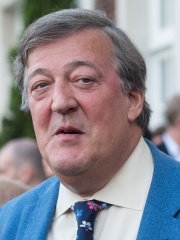 Stephen John Fry (born 24 August 1957) is an English actor, comedian and writer. He and Hugh Laurie are the comic double act Fry and Laurie, who starred in A Bit of Fry & Laurie and Jeeves and Wooster. Fry's film acting roles include playing his idol Oscar Wilde in the film Wilde (1997), a performance which saw him nominated for the Golden Globe Award for Best Actor, Inspector Thompson in Robert Altman's murder mystery Gosford Park (2001), and Mr. Read more on Wikipedia

Since 2007, the English Wikipedia page of Stephen Fry has received more than 7,930,859 page views. His biography is available in 49 different languages on Wikipedia making him the 1,123rd most popular actor.