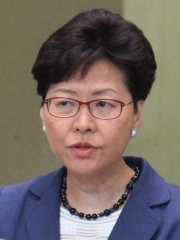 Carrie Lam Cheng Yuet-ngor (Chinese: 林鄭月娥; Cantonese Yale: Làhm Jehng Yuht-ngòh; née Cheng, born 13 May 1957) is a Hong Kong politician serving as the fourth and current Chief Executive of Hong Kong since 2017 and Chairperson of the Committee for Safeguarding National Security since 2020. She served as Chief Secretary for Administration from 2012 to 2017 and Secretary for Development from 2007 to 2012. After graduating from the University of Hong Kong Lam joined the British Hong Kong civil service in 1980 and served in various government agencies. Read more on Wikipedia

Among politicians, Carrie Lam ranks 4,284 out of 15,710. Before her are Bernhard Rust, Al-Muhtadi, Eric XII of Sweden, James FitzJames, 1st Duke of Berwick, Al-Ashraf Qansuh al-Ghuri, and Infanta Maria Antonia of Portugal. After her are Hanno the Great, Shoshenq II, Barak, Rudolph III of Burgundy, Emperor Shunzong of Tang, and Vojislav Šešelj.