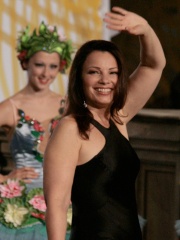 Francine Joy Drescher (born September 30, 1957) is an American actress, comedian, writer, and activist. She is best known for her role as Fran Fine in the hit TV series The Nanny (1993–1999), and for her nasal voice and thick New York accent. Drescher made her screen debut with a small role in the 1977 film Saturday Night Fever, and later appeared in American Hot Wax (1978) and Wes Craven's horror tale Stranger in Our House (1978). Read more on Wikipedia

Since 2007, the English Wikipedia page of Fran Drescher has received more than 6,048,681 page views. Her biography is available in 37 different languages on Wikipedia making her the 1,191st most popular actor.