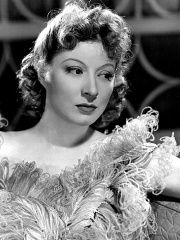 Eileen Evelyn Greer Garson (29 September 1904 – 6 April 1996) was an English-American actress and singer. She was a major star at Metro-Goldwyn-Mayer who became popular during the Second World War for her portrayal of strong women on the homefront; listed by the Motion Picture Herald as one of America's top-ten box office draws from 1942 to 1946. The fourth most-nominated woman for the Best Actress Oscar, Garson received seven Academy Award nominations, including a record-tying (with Bette Davis) five consecutive nominations (1941–1945) in the actress category, winning for her performance in the title role of the 1942 film Mrs. Read more on Wikipedia

Greer Garson is most famous for her role in the 1942 film Mrs. Miniver, which earned her an Academy Award for Best Actress. She was also nominated for the award for her performance in the film Goodbye, Mr. Chips (1939).