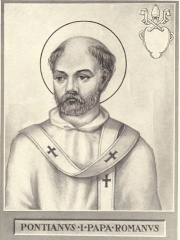 Pope Pontian (Latin: Pontianus; died October 235) was the bishop of Rome from 21 July 230 to 28 September 235. In 235, during the persecution of Christians in the reign of the Emperor Maximinus Thrax, Pontian was arrested and sent to the island of Sardinia. He resigned to make the election of a new pope possible. Read more on Wikipedia

Pope Pontian is most famous for being the first pope to be martyred. He was martyred in Rome in the year 235.

Among people born in 200, Pope Pontian ranks 8. Before him are Pope Lucius I, Pope Fabian, Cyprian, Pope Dionysius, Saint Cecilia, and Pope Cornelius. After him are Hua Tuo, Pope Stephen I, Celsus, Athenaeus, Marcus Claudius Tacitus, and Wei Yan. Among people deceased in 235, Pope Pontian ranks 3. Before him are Severus Alexander and Cassius Dio. After him are Hippolytus of Rome, Claudius Aelianus, and Julia Avita Mamaea.