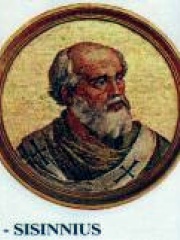 Pope Sisinnius (c. 650 – 4 February 708) was the bishop of Rome from 15 January 708 to his death.Sisinnius was born in Tyre (modern-day Lebanon), and his father's name was John. The paucity of donations to the papacy during his reign (42 pounds of gold and 310 pounds of silver, a fraction of the personal donations of other contemporary pontiffs) indicate that he was probably not from the aristocracy.Sisinnius was selected as pope during the period of Byzantine domination, succeeding John VII after a vacancy of three months. Read more on Wikipedia

Pope Sisinius is most famous for his role in the Council of Chalcedon. The council was called to address the issue of the relationship between Jesus Christ and God.

Among religious figures, Pope Sisinnius ranks 452 out of 2,272. Before him are Parascheva of the Balkans, Pope John XVII, Eber, Pope Adrian III, Hugues de Payens, and Denis. After him are Rabbi Akiva, Ahmed Yassin, Eric IX of Sweden, Pope Miltiades, Rashi, and Genevieve.

Among people born in 650, Pope Sisinnius ranks 3. Before him are Pope Sergius I and Pope John VII. After him are Chlothar III, Dagobert II, Abd al-Rahman ibn Abd Allah al-Ghafiqi, Odo the Great, Childebert the Adopted, Rupert of Salzburg, Jindeok of Silla, Abdallah ibn Sa'd, and Bojang of Goguryeo. Among people deceased in 708, Pope Sisinnius ranks 1. After him are Drogo of Champagne and Jacob of Edessa.