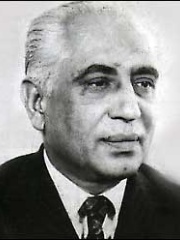 Malik Meraj Khalid (Urdu: ملک معراج خالد‎; 01 02-1916 – 13 June 2003), was an advocate, a Pakistani left wing politician and Marxist philosopher who served as Prime Minister of Pakistan in an acting capacity from November 1996 until February 1997. He was noted as being one of the original philosopher and founding personality of the Pakistan Peoples Party (PPP).Born in 1916 to a poor farming family in Punjab, British India, he graduated from the and graduated in Law from Punjab university law College Lahore in 1942 to start his legal practices by establishing his own law firm in 1948. Inspired by the communist literature published in the Soviet Union, his initial public community work was aimed towards promoting the literacy in his native village. Read more on Wikipedia