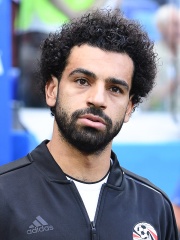 Mohamed Salah Hamed Mahrous Ghaly (Arabic: محمد صلاح حامد محروس غالي, Egyptian Arabic pronunciation: [mæˈħam.mæd sˤɑˈlɑːħ ˈɣæːli]; born 15 June 1992) is an Egyptian professional footballer who plays as a forward or on the right wing for Premier League club Liverpool and captains the Egypt national team. Considered one of the best players in the world and amongst the greatest African players of all time, he is known for his finishing, dribbling, and speed. Salah started his senior career in 2010 playing for Al Mokawloon, departing in 2012 to join Basel, where he won two Swiss Super League titles. Read more on Wikipedia