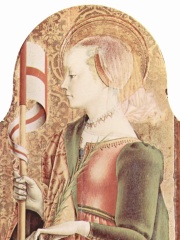 Saint Ursula (Latin for 'little female bear') is a legendary Romano-British Christian saint, died on October 21, 383. Her feast day in the pre-1970 General Roman Calendar is October 21. There is little definite information about her and the anonymous group of holy virgins who accompanied her and on some uncertain date were killed at Cologne. Read more on Wikipedia

Since 2007, the English Wikipedia page of Saint Ursula has received more than 435,381 page views. Her biography is available in 35 different languages on Wikipedia making her the 245th most popular religious figure.

Among religious figures, Saint Ursula ranks 245 out of 2,001. Before her are Pope Anicetus, Pope Gregory II, Pope Anastasius I, Saint Cecilia, Pope Honorius IV, and Saint Pantaleon. After her are Pope Damasus I, Pope Callixtus II, Ephrem the Syrian, Rabia of Basra, Francis de Sales, and Malik ibn Anas.

Among people born in 400, Saint Ursula ranks 2. Before her is Kālidāsa. After her are Merovech, Pope Celestine I, Pope Zosimus, Olybrius, Alexius of Rome, Joannes, Publius Flavius Vegetius Renatus, Fritigern, Constantine III, and Ermanaric. Among people deceased in 383, Saint Ursula ranks 3. Before her are Ulfilas and Gratian. After her are Ardashir II and Frumentius.