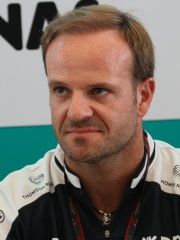 Rubens "Rubinho" Gonçalves Barrichello (Portuguese pronunciation: [ˈʁubẽjz ɡõ'sawviz baʁiˈkɛlʊ], [ʁuˈbĩjʊ]; born 23 May 1972) is a Brazilian racing driver who competed in Formula One between 1993 and 2011. He scored 11 Grand Prix wins and 68 podiums.Barrichello drove for Ferrari from 2000 to 2005, as Michael Schumacher's teammate, finishing as championship runner-up in 2002 and 2004, and third in 2001, while contributing to five constructors' titles for the team. At the end of 2005 Barrichello left Ferrari to drive for Honda. Read more on Wikipedia

Since 2007, the English Wikipedia page of Rubens Barrichello has received more than 1,239,953 page views. His biography is available in 54 different languages on Wikipedia making him the 68th most popular racing driver.