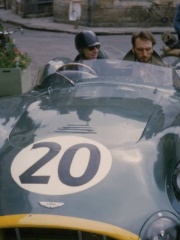 Charles Anthony "Tony" Standish Brooks (born 25 February 1932 in Dukinfield, Cheshire) is a British former racing driver from England also known as the "racing dentist". He participated in 39 Formula One World Championship Grands Prix, debuting on 14 July 1956, achieving six wins, 10 podium finishes and 75 career points. He was third in the World Drivers' Championship in 1958 and second in 1959. Read more on Wikipedia

Since 2007, the English Wikipedia page of Tony Brooks has received more than 37,685 page views. His biography is available in 24 different languages on Wikipedia making him the 144th most popular racing driver.