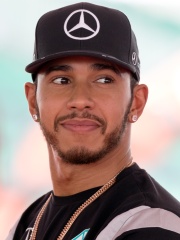 Lewis Carl Davidson Hamilton (born 7 January 1985) is a British racing driver currently competing in Formula One for Mercedes, having previously driven for McLaren. Hamilton has won a joint-record seven World Drivers' Championship titles (tied with Michael Schumacher), while he holds the outright records for the most wins (95), pole positions (98), podium finishes (164), points finishes (228), career points (3763) and points in a season (413). Hamilton is regarded as one of the greatest Formula One drivers in history, with some journalists, experts and fellow drivers describing him as the greatest of all time.Born and raised in Stevenage, Hertfordshire, Hamilton enjoyed a successful ascent up the racing ladder and was signed to the McLaren young driver programme in 1998. Read more on Wikipedia