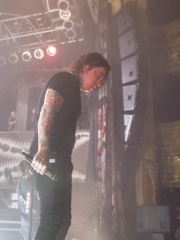 Ronald Joseph Radke (; born December 15, 1983) is an American singer, songwriter, rapper, musician, and record producer. Radke found success as vocalist and co-founder for the post-hardcore band, Escape the Fate, in his early twenties but his career stalled when he was served a ​2 1⁄2-year prison sentence due to a probation violation. After his release, Radke subsequently became the lead singer of a new band, Falling in Reverse. Read more on Wikipedia

Since 2007, the English Wikipedia page of Ronnie Radke has received more than 2,386,653 page views. His biography is available in 24 different languages on Wikipedia making him the 1,334th most popular musician.