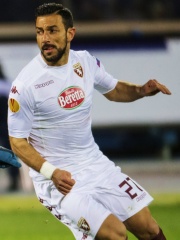 Fabio Quagliarella (Italian pronunciation: [ˈfaːbjo kwaʎʎaˈrɛlla]; born 31 January 1983) is an Italian professional footballer who plays as a forward and captains Sampdoria and the Italy national team. Throughout his career, he has played for eight different Italian clubs, winning three consecutive Serie A titles from the 2011–2012 to 2013–14 season with Juventus. With the Turin-based club he also won two Supercoppa Italiana in 2012 and 2013. Read more on Wikipedia

Since 2007, the English Wikipedia page of Fabio Quagliarella has received more than 1,167,184 page views. His biography is available in 49 different languages on Wikipedia making him the 863rd most popular soccer player.