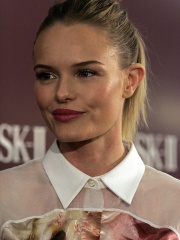 Katherine Ann Bosworth (born January 2, 1983) is an American actress and model. Following minor roles in the films The Horse Whisperer (1998) and Remember the Titans (2000), she rose to prominence with her role as a teenage surfer in the box-office hit Blue Crush (2002). She also had roles in independent films, playing Dawn Schiller in the true crime film Wonderland (2003) and Sandra Dee in the Bobby Darin biographical drama Beyond the Sea (2004). Read more on Wikipedia

Since 2007, the English Wikipedia page of Kate Bosworth has received more than 5,550,772 page views. Her biography is available in 46 different languages on Wikipedia making her the 3,376th most popular actor.

Among actors, Kate Bosworth ranks 3,350 out of 8,832. Before her are Embeth Davidtz, Catherine Frot, Michael Wilding, Hunter Tylo, Margaret Colin, and Benoît Poelvoorde. After her are So Ji-sub, Devika Rani, Lesley Ann Warren, Mia Wasikowska, Laura Harring, and Misha Collins.