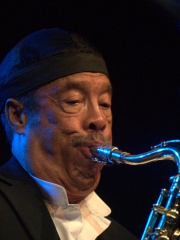 John Arnold Griffin III (April 24, 1928 – July 25, 2008) was an American jazz tenor saxophonist. Nicknamed "the Little Giant" for his short stature and forceful playing, Griffin's career began in the early 1940s and continued until the month of his death. At eighty, he felt no need to stop. Read more on Wikipedia

Since 2007, the English Wikipedia page of Johnny Griffin has received more than 142,578 page views. His biography is available in 17 different languages on Wikipedia making him the 1,232nd most popular musician.