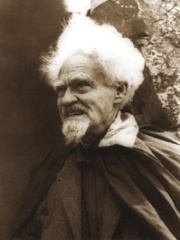 Gerald Brosseau Gardner (13 June 1884 – 12 February 1964), also known by the craft name Scire, was an English Wiccan, as well as an author and an amateur anthropologist and archaeologist. He was instrumental in bringing the Contemporary Pagan religion of Wicca to public attention, writing some of its definitive religious texts and founding the tradition of Gardnerian Wicca. Born into an upper-middle-class family in Blundellsands, Lancashire, Gardner spent much of his childhood abroad in Madeira. Read more on Wikipedia

Among writers, Gerald Gardner ranks 1,685 out of 5,794. Before him are Michel Zevaco, Ivy Lee, Annie Ernaux, Lu You, Nicander, and Hellanicus of Lesbos. After him are Ivan Klíma, Nora Roberts, Maria Gripe, Akiyuki Nosaka, Uri Avnery, and Hanns Heinz Ewers.