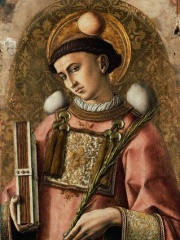 Stephen (Greek: Στέφανος Stéphanos, meaning "wreath, crown" and by extension "reward, honor, renown, fame", often given as a title rather than as a name; Hebrew: סטפנוס הקדוש, Stephanos HaQadosh; c. 5 – c. 34 AD), traditionally venerated as the protomartyr or first martyr of Christianity, was, according to the Acts of the Apostles, a deacon in the early Church at Jerusalem who angered members of various synagogues by his teachings. Read more on Wikipedia

Saint Stephen is most famous for being the first Christian martyr. He was stoned to death by a mob in Jerusalem in the year 36.

Among religious figures, Saint Stephen ranks 31 out of 2,238. Before him are Abu Bakr, Matthew the Apostle, Saint Barbara, Samson, Martin of Tours, and Jonah. After him are John the Apostle, Pope Benedict XVI, Saint Lucy, Husayn ibn Ali, Queen of Sheba, and James, son of Zebedee.