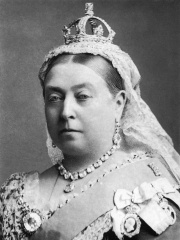 Victoria (Alexandrina Victoria; 24 May 1819 – 22 January 1901) was Queen of the United Kingdom of Great Britain and Ireland from 20 June 1837 until her death in 1901. Her reign of 63 years and seven months was longer than that of any previous British monarch and is known as the Victorian era. It was a period of industrial, political, scientific, and military change within the United Kingdom, and was marked by a great expansion of the British Empire. Read more on Wikipedia

Queen Victoria was the Queen of the United Kingdom of Great Britain and Ireland from 1837 until her death in 1901. She was the last monarch of the House of Hanover, and her reign lasted for 63 years and seven months, longer than that of any other British monarch.

Among politicians, Queen Victoria ranks 30 out of 15,577. Before her are Hammurabi, Cicero, Mikhail Gorbachev, Attila, Hurrem Sultan, and Mao Zedong. After her are Commodus, Osman I, Abraham Lincoln, Qin Shi Huang, Louis XVI of France, and Charles V, Holy Roman Emperor.