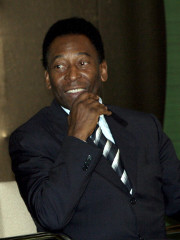 Edson Arantes do Nascimento (Brazilian Portuguese: [ˈɛtsõ (w)ɐˈɾɐ̃tʃiz du nɐsiˈmẽtu]; born 23 October 1940), known as Pelé (Portuguese pronunciation: [peˈlɛ]), is a Brazilian former professional footballer who played as a forward. Regarded as one of the greatest players of all time, and labelled "the greatest" by FIFA, he was among the most successful and popular sports figures of the 20th century. In 1999, he was named Athlete of the Century by the International Olympic Committee and was included in the Time list of the 100 most important people of the 20th century. Read more on Wikipedia

Page views of Pelé by language