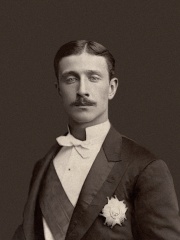 Napoléon, Prince Imperial (Napoléon Eugène Louis Jean Joseph Bonaparte; 16 March 1856 – 1 June 1879), also known as Louis-Napoléon, was the only child of Napoleon III, Emperor of the French, and Empress Eugénie. After his father was dethroned in 1870, he moved with his family to England. On his father's death in January 1873, he was proclaimed by the Bonapartist faction as Napoleon IV. In England, he trained as a soldier. Read more on Wikipedia

Napoléon, prince imperial is most famous for being the son of Napoléon III, emperor of France. He was born in 1856 and died in 1879.

Among politicians, Napoléon, Prince Imperial ranks 1,215 out of 15,710. Before him are Andronikos III Palaiologos, Alexander I of Serbia, Ottokar II of Bohemia, Sejo of Joseon, Fuxi, and Princess Ludovika of Bavaria. After him are Ibrahim Pasha of Egypt, Baldwin I, Latin Emperor, Philippikos Bardanes, Ephialtes of Trachis, Humayun, and 2nd Dalai Lama.