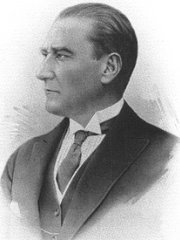 Kemal Atatürk (or alternatively written as Kamâl Atatürk, Mustafa Kemal Pasha until 1934, commonly referred to as Mustafa Kemal Atatürk; circa 1881 – 10 November 1938) was a Turkish field marshal, revolutionary statesman, author, and the founding father of the Republic of Turkey, serving as its first president from 1923 until his death in 1938. He undertook sweeping progressive reforms, which modernized Turkey into a secular, industrial nation. Ideologically a secularist and nationalist, his policies and theories became known as Kemalism. Due to his military and political accomplishments, Atatürk is regarded as one of the most important political leaders of the 20th century.Atatürk came to prominence for his role in securing the Ottoman Turkish victory at the Battle of Gallipoli (1915) during World War I. Read more on Wikipedia

Since 2007, the English Wikipedia page of Mustafa Kemal Atatürk has received more than 5,672,198 page views. His biography is available in 186 different languages on Wikipedia making him the 10th most popular politician.

Among politicians, Mustafa Kemal Atatürk ranks 10 out of 14,801. Before him are Donald Trump, Louis XIV of France, Joseph Stalin, Thomas Jefferson, Augustus, and Vladimir Lenin. After him are Charlemagne, Elizabeth I of England, Jimmy Carter, Saladin, Tutankhamun, and Cleopatra.