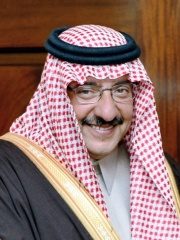 Muhammad bin Nayef Al Saud (Arabic: محمد بن نايف آل سعود‎ Muḥammad bin Nāyif Āl Su‘ūd; born 30 August 1959) is a Saudi Arabian retired politician and businessman who served as the crown prince and first deputy prime minister of Saudi Arabia from 2015 to 2017 and as the minister of interior from 2012 to 2017. He is a grandson of the founding monarch, King Abdulaziz, and son of the former crown prince Nayef bin Abdulaziz. Muhammad and Nayef were the first father-son duo in Saudi history to serve as crown prince. Read more on Wikipedia

Among politicians, Muhammad bin Nayef ranks 7,584 out of 15,710. Before him are Trygve Bratteli, Marcus Claudius Marcellus, Kleitias, Si Inthrathit, Lupus II of Gascony, and Frederick William, Elector of Hesse. After him are Takeo Miki, Anna Maria Franziska of Saxe-Lauenburg, Duke Philipp of Württemberg, James E. Webb, Henry of Speyer, and Henry V, Count Palatine of the Rhine.