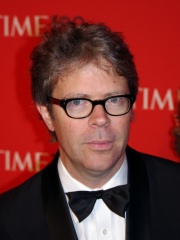 Jonathan Earl Franzen (born August 17, 1959) is an American novelist and essayist. His 2001 novel The Corrections, a sprawling, satirical family drama, drew widespread critical acclaim, earned Franzen a National Book Award, was a Pulitzer Prize for Fiction finalist, earned a James Tait Black Memorial Prize and was shortlisted for the International Dublin Literary Award. His novel Freedom (2010) garnered similar praise and led to an appearance on the cover of Time magazine alongside the headline "Great American Novelist".Franzen has contributed to The New Yorker magazine since 1994. Read more on Wikipedia

Since 2007, the English Wikipedia page of Jonathan Franzen has received more than 1,418,066 page views. His biography is available in 33 different languages on Wikipedia making him the 2,976th most popular writer.