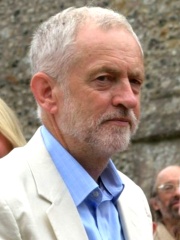 Jeremy Bernard Corbyn (; born 26 May 1949) is a British politician who served as Leader of the Labour Party and Leader of the Opposition from 2015 to 2020. He has been Member of Parliament (MP) for Islington North since 1983. On the political left of the Labour Party, he ideologically identifies as a socialist and democratic socialist.Born in Chippenham, Wiltshire, and raised in both Wiltshire and Shropshire, Corbyn joined Labour as a teenager. Read more on Wikipedia

Among politicians, Jeremy Corbyn ranks 6,618 out of 15,710. Before him are Guttorm of Norway, George II, Landgrave of Hesse-Darmstadt, Jacob Stainer, Perctarit, William I, Count of Hainaut, and Luis de Requesens y Zúñiga. After him are Salvador Sánchez Cerén, Sigobert the Lame, John Connally, Emperor Gao of Southern Qi, Prince Sixtus of Bourbon-Parma, and Sansang of Goguryeo.