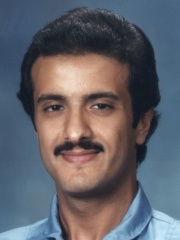 Sultan bin Salman bin Abdulaziz Al Saud (Arabic: سلطان بن سلمان بن عبد العزيز آل سعود‎) (born 27 June 1956) is a former Royal Saudi Air Force pilot who flew aboard the American STS-51-G Space Shuttle mission as a payload specialist, and a member of the House of Saud. He is the first member of a royal family to fly in space, the first Arab to fly in space, and the first Muslim to fly in space, as well as (at 28 years old) the youngest person ever to fly on the Space Shuttle. Read more on Wikipedia

Since 2007, the English Wikipedia page of Sultan bin Salman Al Saud has received more than 480,272 page views. His biography is available in 31 different languages on Wikipedia making him the 8,674th most popular politician.

Among politicians, Sultan bin Salman Al Saud ranks 8,638 out of 14,801. Before him are Audoin, Oleg Gordievsky, Christopher Lekapenos, Elephant, Robert Mueller, and Gaius Sosius. After him are Constantin Dăscălescu, Minamoto no Yoshiie, Princess Marie Auguste of Thurn and Taxis, Franz Müntefering, Karl-August Fagerholm, and Alexander Izvolsky.